UPDATE: MullieMotors is having a sabattical.
We hope to reopen in the summer of 2022 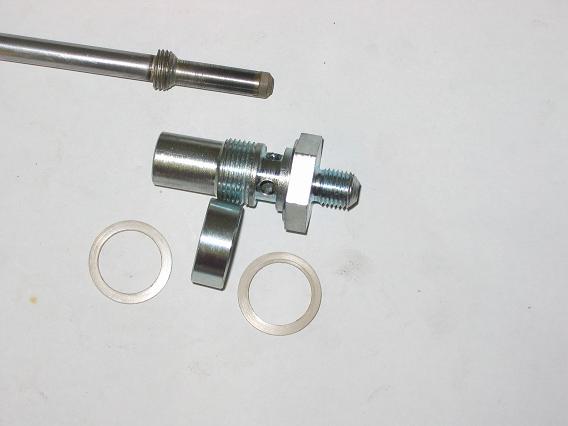 The "through-the-tank" petrol valves on vintage HD's are notorious for leaking, both OEM ones as aftermarket ones. The mating surfaces of the rod tip and the receiving nipple in the bottom of the tank have to be in perfect condition, and the entire assembly perfectly aligned for the valve to shut off leak-free. Even if these conditions are met, petrol is likely to seep through.

Mullie Motors offers the service to replace the tip of the rod with a tip out of PEEK. PEEK is a modern material that is resistant to modern fuels and hard enough yet more pliable/elastic than metal. Hence, a petrol valve with a PEEK tip on the rod will seal off much better than a metal one, and is more forgiving to imperfections in installation. In the process, we also replace the two nipple washers with washers made out of PEEK for a better seal and reusability than the original washers (HD part number 3638-40 and 62085-40).

Replacing the tip of the rod of your petrol valve, including two nipple washers, will cost 40,- Euros (incl. VAT, excl. shipping).

We also sell replacement rods and complete petrol valves equipped with a PEEK tip and washers:

Below is a brief description of the process of replacing a fuel rod tip for a PEEK one.
Mullie Motors is a trademark of Mullie B.V.
For questions, remarks, or further information please mail to info@mulliemotors.com